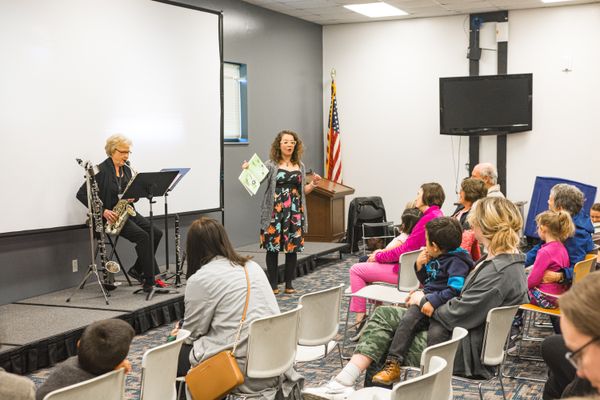 As part of its efforts to reach out to the community and expose children to classical music, the Binghamton Philharmonic Orchestra this summer is presenting a series of live readings, with music, of the children’s book Quaver Has a Feeling.

The book, written and illustrated by local children’s author Debbie Honas, takes readers on the journey of Quaver, the eighth note in music, as the character deals with a wide range of emotions from anger to happiness to sadness to thankfulness.

Honas, writing under the pen name Lenora Riegel, hopes the book helps children deal with them own emotions. “It’s important for kids to know they have different feelings, and it’s OK to have them. We all have them,” she said.

The next reading will take place 1 p.m. Tuesday (July 12) at Broome County Public Library, 185 Court St., Binghamton. The Philharmonic also has scheduled readings at 1 p.m. and 2 p.m. Aug. 6 at the Spiedie Fest in Otsiningo Park. The Spiedie Fest readings will take place near the south entrance restrooms by the playground, directly across from the NYSEG tent. NYSEG is sponsoring all the programs, which are free of charge.

The readings are multi-faceted. Erika Dentinger, director of operations for the Philharmonic, will read Quaver Has a Feeling while Philharmonic musician April Lucas accompanies her on the clarinet and saxophone.

The book has QR codes throughout its pages that readers can access with their phone cameras to listen to 30- to 45-second snippets of classical music. The snippets, taken from Philharmonic recordings in the Wallenberg Legacy Recording Archive, reflect the emotions covered in the book. For example, the reading about happiness is linked to a snippet from the overture to Mozart’s opera The Magic Flute.

The goal is to use a combination of words, illustrations and music to engage children, pique their interest and have them understand a variety of feelings, organizers said.

The idea for readings grew out of “pop-up” concerts that Philharmonic musicians played in the community over the past two summers during COVID. “We decided to change it to live readings with music,” Dentinger said. The aim was to make a smooth transition to a program aimed at a younger age group “to introduce them to the world of classical music,” she added.

“I think it’s great,” Honas said. “The whole idea is to bring things to the community.”

The Owego author began writing children’s books after retiring from a 35-year career as a design engineer. “It’s my first love,” she said. She has now written seven books, all set in the Finger Lakes region. They are published and distributed by Honas’ company, Siphre Books (www.siphrebooks.com).

The series of readings began in May and June with well-attended programs at the Vestal Public Library and Discovery Center of the Southern Tier. They are part of the Philharmonic’s efforts to stay active in the summer months.

“Summer is great for us to get a chance to do community outreach,” Dentinger said.

Click here to see our upcoming Quaver Has a Feeling events, along with other educational events.