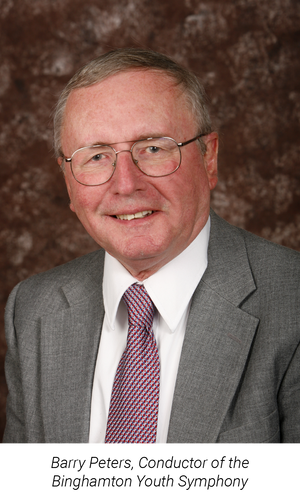 Barry Peters has been the conductor of the Binghamton Youth Symphony since 1997.  A native of Pennsylvania, he received a B.S. in Music Education from Mansfield University and a M.M. from Ithaca College. His teaching career began in Troy, PA in 1970 and continued through his retirement in 2002 from Union-Endicott. His bands have performed at many competitions, pageants, college bowls, and professional football games, receiving numerous honors, including many “gold with distinction” ratings.

Under Peters’ direction, the Binghamton Youth Symphony has been a featured performing ensemble at the NYSSMA Winter Conference and has played concerts in the Washington, D.C. and Boston areas. In addition, the BYS has commissioned and premiered several works by local composers and appears annually on local television.

In 2005, The New York State Band Directors Association named Mr. Peters the recipient of their Outstanding Retired Band Director Award, an honor given to someone who has had a noteworthy career and continues to contribute to the band movement after retirement, and in 2010, the Mansfield University Alumni Association honored him with the Distinguished Educator Award. 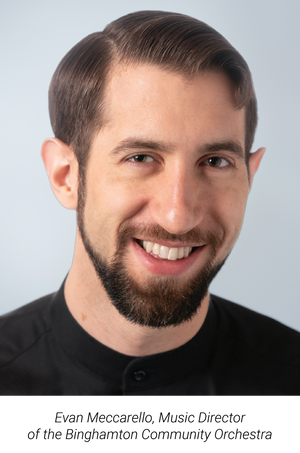 Evan Meccarello, Music Director of the Binghamton Community Orchestra (BCO), is committed to new explorations in classical music and engaging with communities across the Northeast.  He is Artistic Director of Cordancia Chamber Orchestra (Rochester, NY), Founder and Director of the Hochstein Alumni Orchestra, and previously directed the Thames Valley Youth Symphony and Nazareth College Chamber Orchestra.  This season’s engagements include serving as cover conductor for the Wheeling Symphony Orchestra (Wheeling, WV), guest conducting in schools, and a set of children’s concerts with the Irondequoit Community Orchestra in four Rochester libraries.

Along with the BCO, Meccarello was named a National Finalist for The American Prize in virtual performance, for the innovative program Music Outside the Box.  This all-online festival for high school musicians featured live virtual ensemble rehearsals and performances during the pandemic lockdown.  Through collaboration with the Broome County Music Educators Association, students from districts across the Binghamton area had the opportunity to play and learn together, playing contemporary classical music designed to be performed online.  The project received international attention, leading to an invitation to present a similar experience to Sistema Europe Youth Orchestra.